How to Deploy from GitLab to AWS Fargate

Web Captioner now runs on AWS Elastic Container Service (ECS) and Fargate, services by Amazon that allow you to deploy a Dockerized application without having to configure servers. This post explains how I deploy the Web Captioner application to a AWS Fargate task type using GitLab.

With GitLab and AWS, I can make one-click deployments to my staging and production environments. I can independently deploy different branches of code to each environment. With minimal effort, it’s also possible for me to create an additional stack (load balancer and all), and deploy to that. 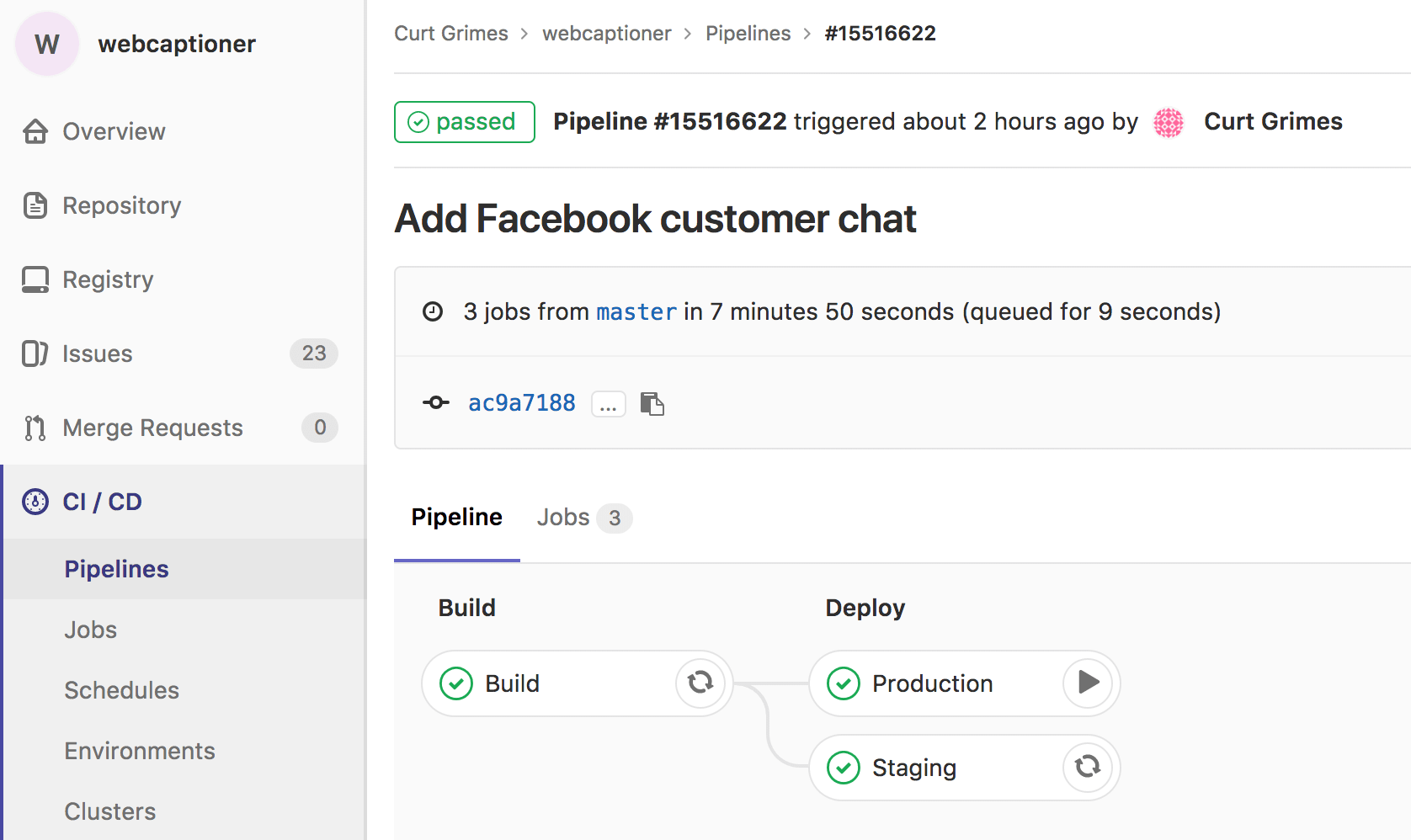 AWS also provides alerts if my application ever becomes unavailable (or the number of concurrent instances of my application falls below a threshold) and some cool graphs. Graphs are always cool.

AWS Fargate is a new technology in the Amazon Web Services Elastic Container Service that allows you to run a Dockerized application without having to provision virtual servers. In conjunction with other AWS services, you can:

I decided to use AWS ECS and Fargate for Web Captioner because of the redundancy and high availability it provides. It also abstracts away just enough of the work of server management so that I can spend more time on application development.

The AWS stack includes the following resources that you will need to set up.

A good way for getting all this set up is by following Amazon’s cluster creation wizard in the AWS console. It’ll create these resources and link them all together, but there’s certain things you won’t be able to change after they’re created, like the naming of some resources. To get around that, you can use CloudFormation to create an entire stack.

Making the entire stack with CloudFormation

It’s difficult to recreate a stack you’ve made with the wizard (for example, if you want to have staging and production environments), so I use this Web Captioner CloudFormation stack template (JSON) template for easily creating an entire new instance of my stack.

Note that there are references to Web Captioner in here (search for “webcaptioner”) that you will need to change. When you create this stack, it also asks for the name of an existing task definition (so you will need to have a task definition already created). You’ll need to set 80 and 443 (or some other ports) as listening ports in your load balancer after the stack is created, or maybe add a certificate from AWS Certificate Manager if you’re going to use a domain name. If you use this template, treat it as a starting point and customize it to fit your needs.


Let’s take a closer look at this.

These lines let us use the docker-in-docker executor on Gitlab.com, which gives us access to docker and docker-compose in our CI scripts.

We’ve got a build stage and a deploy stage in each pipeline: 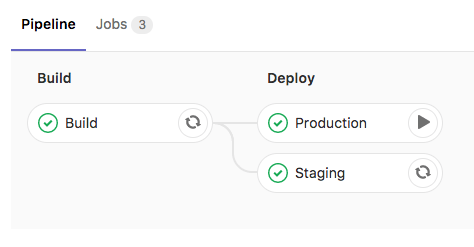 We are logging into GitLab's container registry. During the build stage, after we build our Docker image, we will push it to this registry. Later during deployment the image gets pushed to the AWS elastic container service (ECS) registry.

Our `build` stage will happen every time we push a new commit. `$CI_REGISTRY_IMAGE` and `$CI_COMMIT_REF_SLUG` are special [GitLab CI variables](https://docs.gitlab.com/ee/ci/variables/README.html) that get replaced respectively with the path to the GitLab registry tied to the current project and the current commit's branch name. My app has a [`Dockerfile`](https://docs.docker.com/engine/userguide/eng-image/dockerfile_best-practices/) in the root, so these commands will build the application, tag it something like `registry.gitlab.com/projectname/webcaptioner:master` (if I was committing to the `master` branch in the `webcaptioner` project), and then push it to the [Docker registry I've enabled in GitLab](https://docs.gitlab.com/ce/user/project/container_registry.html#enable-the-container-registry-for-your-project) for this project: 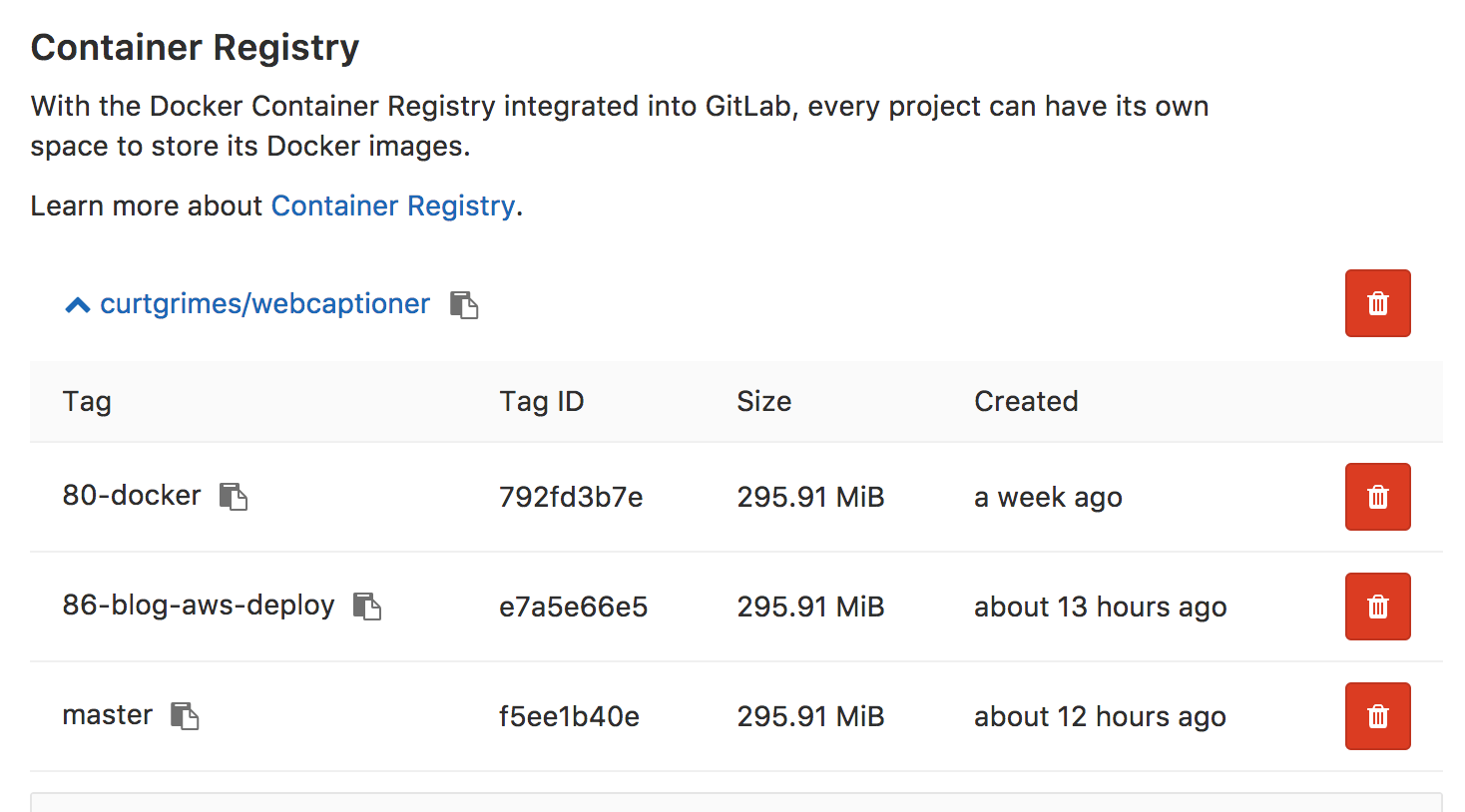 These next two sections define two deploy stage jobs - one for deploying to a staging environment, and one for deploying to my production environment. They run a `deploy.sh` script that I'll get to in a minute. On the `Production` job, `when: manual` prevents this job from running automatically — but I can start it on any commit if I wish. GitLab has more information about the [`when`](https://docs.gitlab.com/ce/ci/yaml/README.html#when) keyword in CI configurations. ### deploy.sh I've added these secret variables in GitLab under Settings > CI / CD > Secret variables:

Learn more about [getting your AWS access key and AWS secret access key](http://docs.aws.amazon.com/general/latest/gr/aws-sec-cred-types.html#access-keys-and-secret-access-keys) that will let you use the [AWS command line interface](https://aws.amazon.com/cli/). I'd suggest installing the command line interface and playing around with it to make sure you can get it connected to your AWS environment outside of GitLab CI scripts. For convenience, I've also put `AWS_REGION` in here as a variable. (As of this writing, [Fargate is only available](https://aws.amazon.com/about-aws/whats-new/2017/11/introducing-aws-fargate-a-technology-to-run-containers-without-managing-infrastructure/) in US East, N. Virginia). Here is the `deploy.sh` script run by both the `Staging` and `Production` jobs: **deploy.sh** You'll notice multiple uses of `$CI_ENVIRONMENT_SLUG` above. In our `Staging` environment, this value becomes "`staging`". In `Production`, it is set to "`production`". Again, these values come from the environments defined in `gitlab-ci.yml`: So when we run `aws ecs update-service --cluster webcaptioner-$CI_ENVIRONMENT_SLUG` in `deploy.sh` above, we're updating the service of the cluster named `webcaptioner-staging` or `webcaptioner-production`. ### Task Definition `deploy.sh` above uses a task definition JSON file stored in our code repository to register a new version of a task definition every time our container updates. Even though the definition doesn't have to have changes, we still need to register a new version so that we tell our service (which can run one to many concurrent tasks made using the task definition) that a new version of the task definition exists. Since this task definition has some references specific to your stack (like a staging or production stack), you'll have to have a different task definition for each environment. Here is my production task definition: **webcaptioner-task-definition-production.json** Some things to note here: The `image` value has the path to my AWS container registry and says to use the image tagged `production` (which happened when I pushed the image in line 24 of `deploy.sh`). The `environment` array lets you define environment variables for your Docker container. In my case, I'm setting a configuration value for [Hugo](https://gohugo.io/), the static site generator I use to create [this blog](/blog) and Web Captioner's [Help Center](/help). Also note that `8080` is the port that my container exposes itself on. ## Running it all In GitLab, you'll be able to watch the job's progress and see output similar to this: 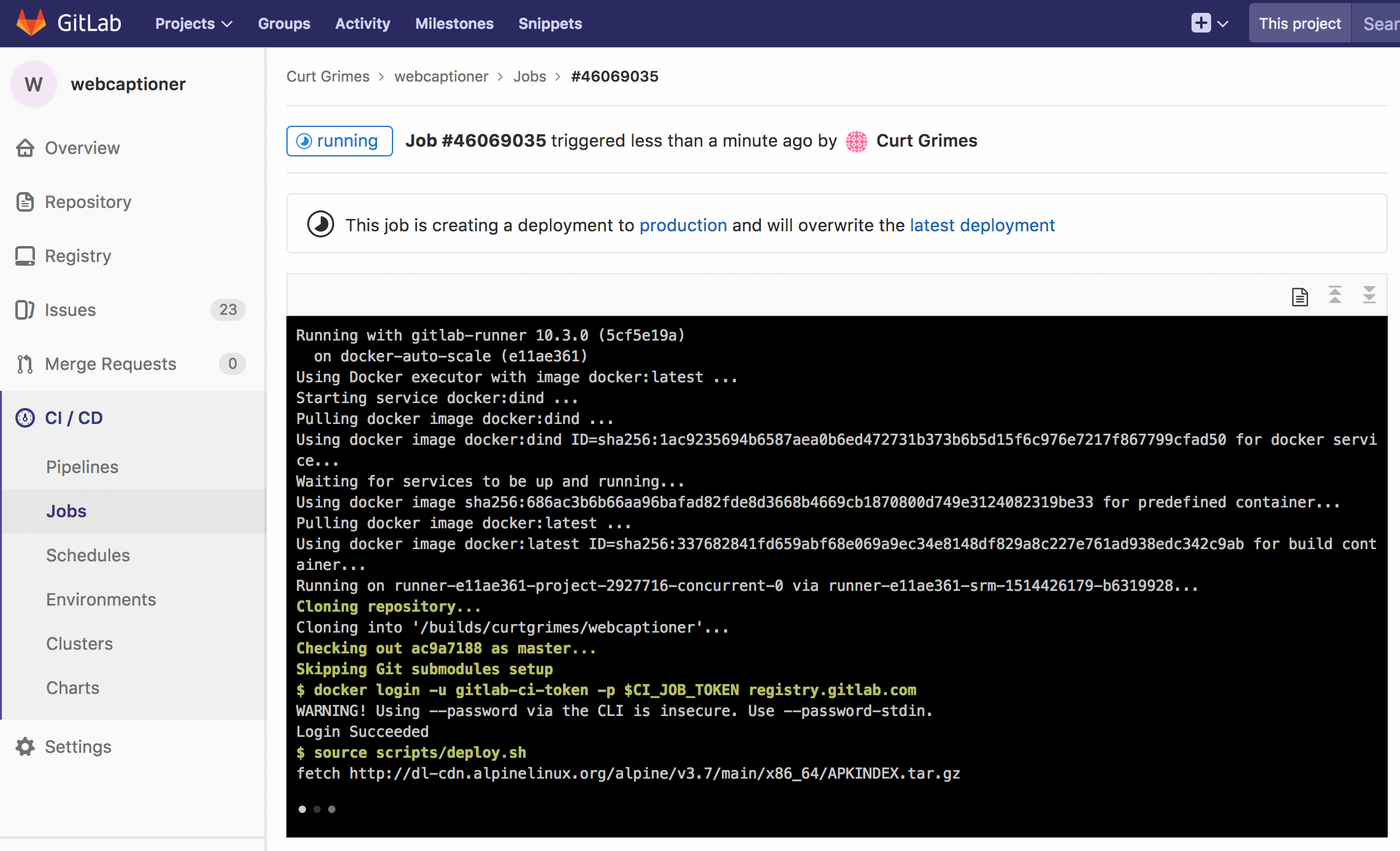 After the deploy is done, the cluster running in AWS will replace its running instances of tasks with the new version. It will take a few minutes for it to switch over and for autoscaling to automatically stop the old instances (depending on how you have autoscaling configured in your cluster). I have my cluster set up to always have a minimum of two task instances running, and you can see here that the old version (7) of the task runs while the new version (8) is starting up. 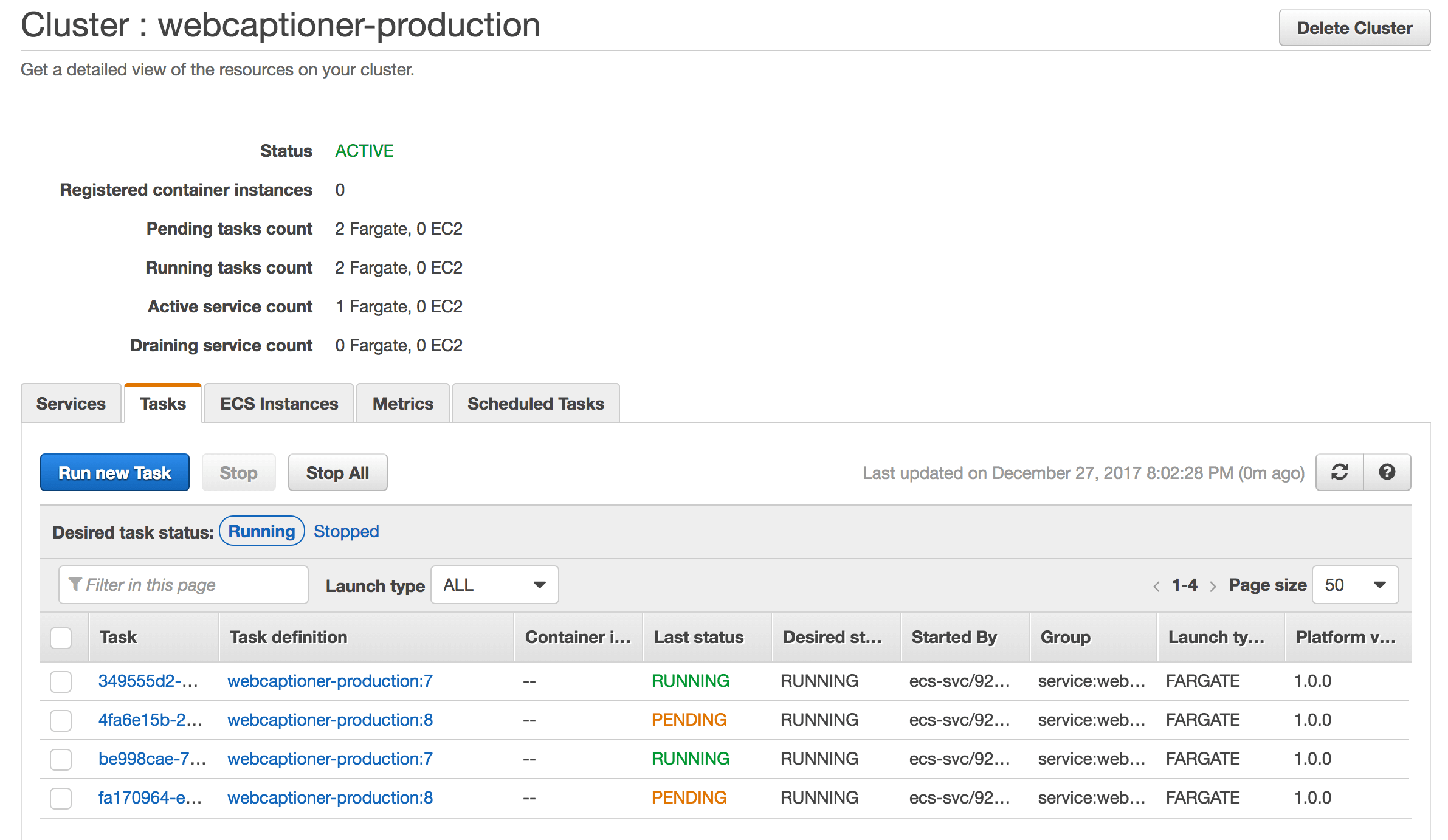 When your new task becomes available, the cluster immediately begins draining connections to the old version of the tasks in preparation of removing the task. The Events tab will show you the status of this: 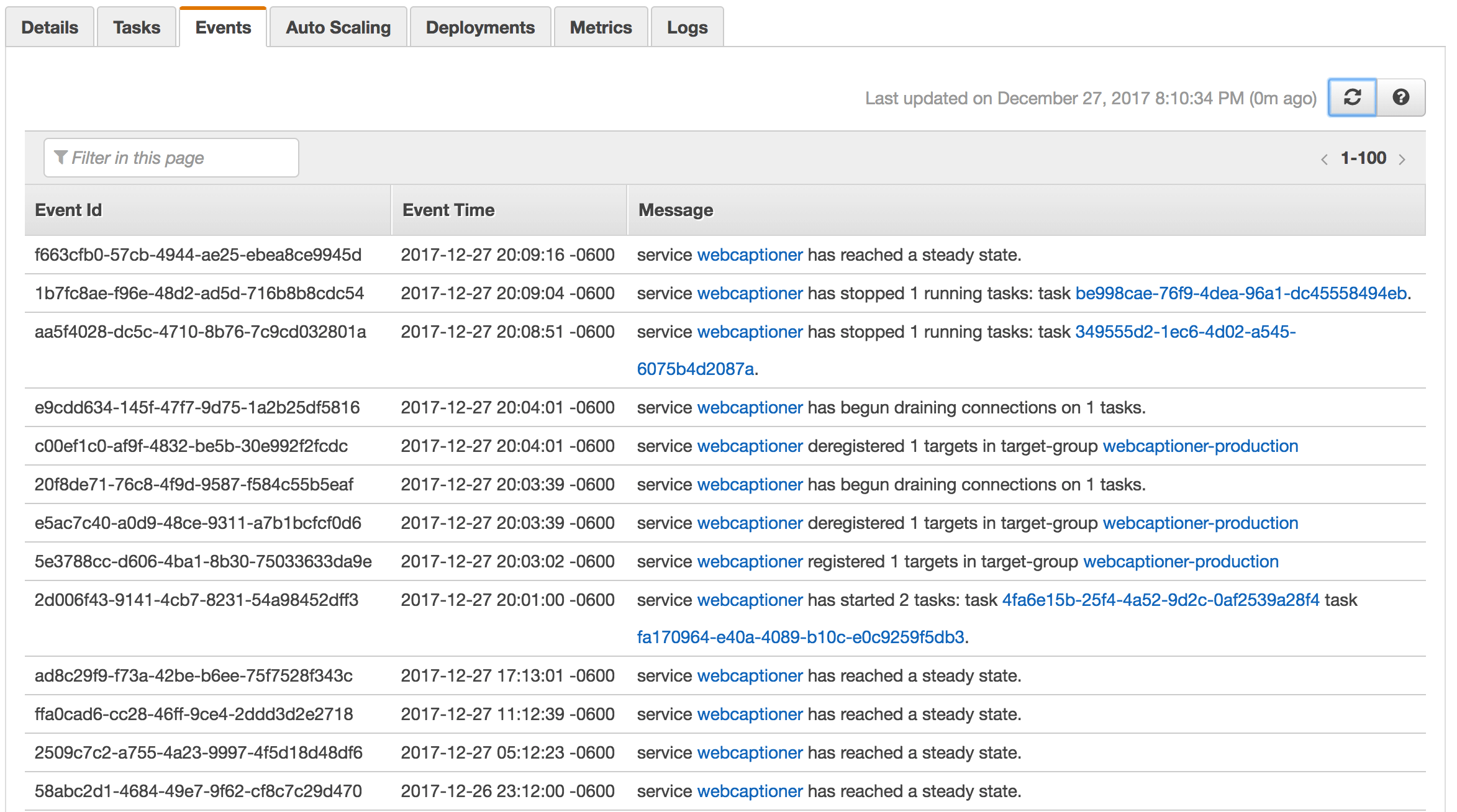 If all has gone well, you should be able to access your application using the DNS name given to your load balancer: 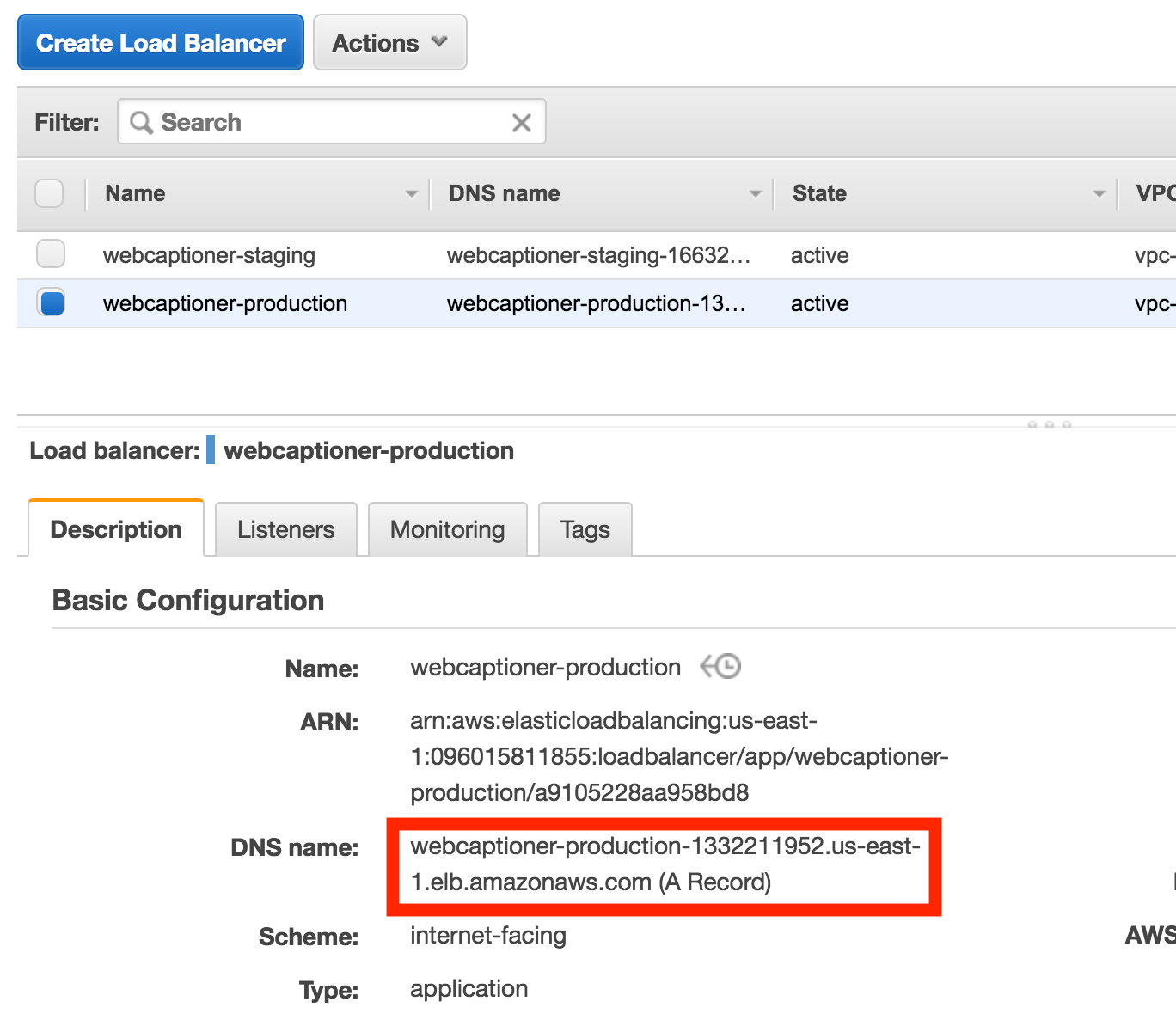 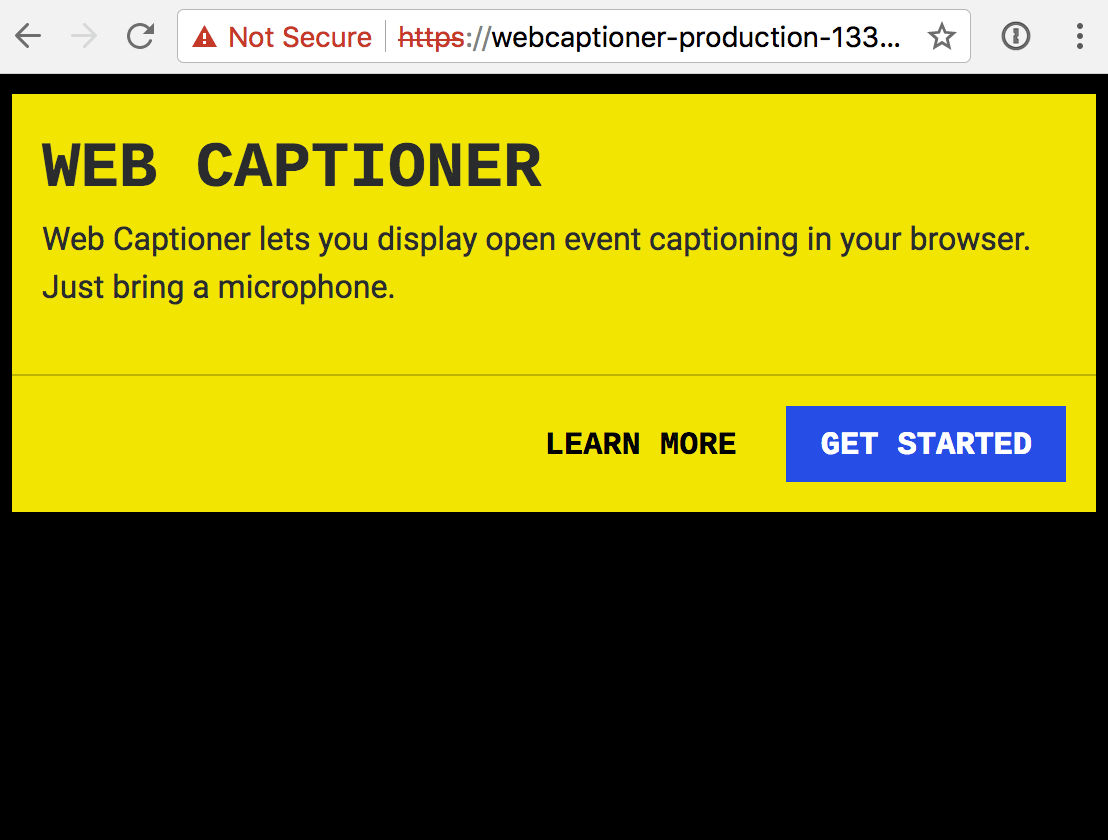 (The HTTPS warning here is due to the fact that my application redirects all HTTP requests to HTTPS and the DNS name provided by ELB does not have a certificate registered. But in production you wouldn’t distribute the ELB name — you would have your own DNS name create an A record that points to your load balancer.)

Got questions about how I’m deploying from GitLab to AWS? Feel free to comment below or message me.

Zoom allows using third-party captioning services in meetings, but unfortunately due to an issue with the design of their API, it is not possible for Web Captioner or other third-party services to reliably integrate with Zoom meetings. This is my support thread with Zoom about the issue. 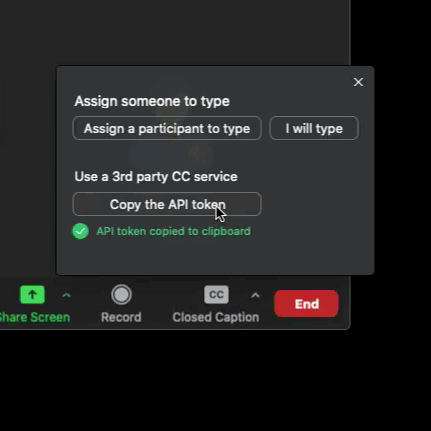 Happy September! It has been a while since a full Web Captioner update. I have exciting things to announce about Zoom support, closed captioning with OBS, experiments, the help center, and more. 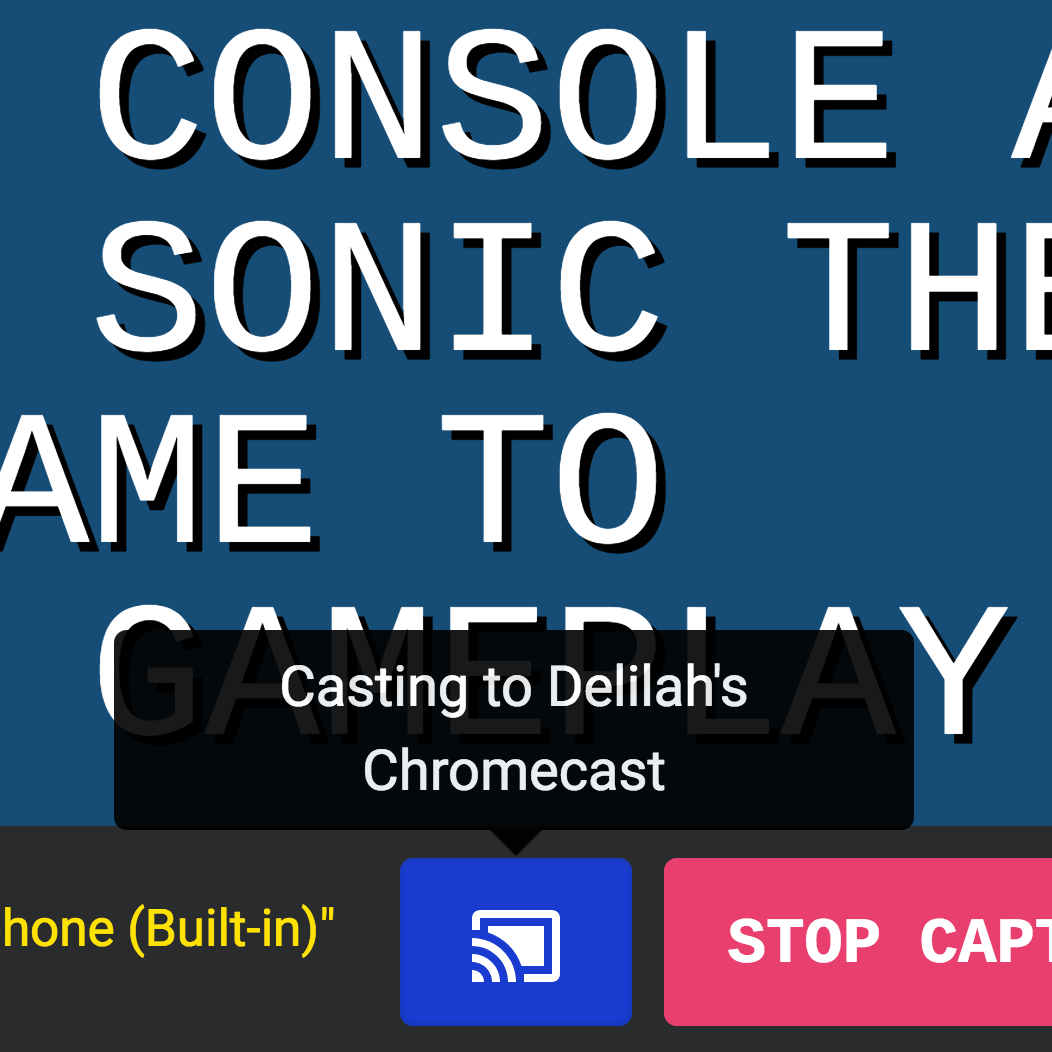 In its latest update, Web Captioner gets Chromecast integration, autostart, the ability to export/restore settings, and more.